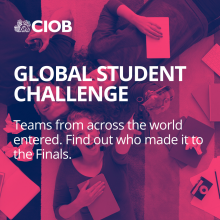 The annual CIOB Global Student Challenge (GSC) is now hotting up as the final six competing for this prestigious title are announced. In this the seventh year of the competition, in which teams act as a Board of Directors running their own construction company, the Chartered Institute of Building (CIOB) is announcing a truly global line up of finalists, with representation from not just six different institutes, but six different countries and four continents.

The top six – and the only teams now remaining of the 51 who entered – are:

Since 2014, the competition has challenged built environment students to run their own virtual construction company. Teams are made up of full-time students studying for a degree in the built environment. CIOB’s Global Student Challenge is a real test of construction industry know-how, taking place in stages over a number of months. The “Foundation Years” stage, which kicked off in January is where teams learnt how to play the game, running a virtual construction company in a simulated environment using the MERIT software*, testing out strategies and refining tactics for the competitive game. The “Early Years” stage started a few weeks later, with teams playing competitively with other teams around the world, making decisions that influenced the success of their companies.

This is shaping up to be a particularly exciting final as Chongqing University and George Brown College have been unequivocally battling it out for the top two spots almost the entire competition so far, aside from a brief period in which Universitas Indonesia, last year’s winner, broke into the top two.

Owing to the current global coronavirus (COVID-19) situation, the finals will be conducted online.

You can track the success of the teams throughout the final stages of the competition – follow the CIOB’s Twitter feed for updates: @theCIOB