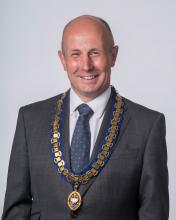 Peter Jacobs, Managing Director for London at Morgan Sindall has been inaugurated as  President of the Chartered Institute of Building, taking over from Alan Crane CBE.

Speaking about his appointment, Peter said, “It is a distinct honour to take on the Presidency of the Institute and take over from a fellow Bovis alumnus in Alan Crane.

“My commitment as CIOB President will ensure we are moving forward in the right way, making sure our qualifications give our members the best possible advantage in their careers.

“The industry is changing faster than at any stage during my career, the words BIM and sustainability are now commonplace – but the grassroots construction of every project must not be forgotten. In an age of cuts and efficiency drives from government, our biggest challenge remains in equipping the next generation with the skills we need to deliver projects more for less.”

In a career spanning over 30 years, Peter has held senior positions within Trollope and Colls, working as an engineer and contracts manager before joining Bovis Lend Lease in 1987. As project manager he was responsible for the delivery of the affectionately named ‘Armadillo’ Exhibition Centre in Glasgow.

Peter spent 10 years as a Director at Bovis, responsible for a range of prestigious projects including the business hub of Paternoster Square and the glamorous riverside of Chelsea Bridge Wharf. The culmination of his Bovis career was heading up the team delivering the £1.4bn London 2012 athletes’ village.

In 2013, Peter joined Morgan Sindall as regional managing director, leading on growth and expansion in the capital. He also leads Morgan Sindall’s Airport and Aviation division, delivering construction and integrated services to Heathrow, Gatwick and a number of other regional airports across the UK.